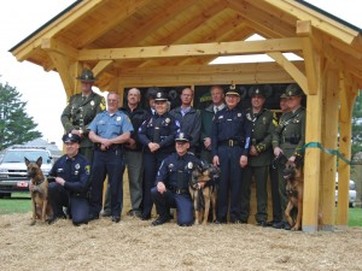 The VT Police Canine Association began in 2000 as a non-profit association to support VT’s Police K9 Teams with additional training, equipment and other needs. Although our non-profit Association is relatively new, VT’s Police Canine Program began in 1979, and has been credited with hundreds of arrests, hundreds of lives saved, tons of drugs seized, and millions of dollars in seized assets.
Several years ago one of senior handlers, Corporal Tom Radford of the Burlington Police Department (with his dog, K-9 Stoney) strongly believed that there needed to be some recognition of the work done by our teams over the years. In 2008 his plan had gained enough momentum and he had raised enough funds to build the VT Police Canine Hall of Fame.
In May 2008 we inducted 14 members into the new Hall of Fame. In May of 2009 we inducted 3 more, and 1 more in May of 2010.
Inductees are determined by a vote from the VT Police Canine Committee, which is also tasked by the VT Criminal Justice Training Council with certifications and creating training standards for our program.
The standards for induction are strict:
This is the highest honor bestowed on a Vermont Police K9 Team or person. The Hall of Fame is reserved for K9 Teams and/or person(s) that exhibited outstanding dedication to the VT Police K9 Program throughout their career. Hall of Fame inductees remained proficient in all phases of training, promoted the positive attributes of the K9 program yearly, and who either performed heroic deed(s), obtained major accomplishments, or dedicated their lives to the betterment of the program. The Hall of Fame is reserved for the K9 teams and/or person(s) who are considered the best of their era or major contributors to the success of the program, and whose passion towards this elite position was exhibited in the high quality of work they produced throughout their years of service to the K9 Program..
Committee members agreed that this honor is for retired K9 teams; that the team would have had to work 5 years together; to have performed at a level of excellence for a long time, including numerous great deeds with a “never give up” attitude; and if a dog loses it’s life in the performance of their duties.

Our Hall of Fame members are:

Sgt. Matthew Prouty and K-9 King Otto – Rutland City PDSgt. Matthew Prouty has been a member of the Vt. Police K-9 Program since 2001, and has distinguished himself as the premier police canine behaviorist of his generation. He is an expert in remedying aggression issues and reading canine behavior. He has been an in-service instructor and a member of the VCJTC K-9 Committee since 2006 and an assistant instructor since 2009. His experience as a 2-time handler, with over 1400 deployments, 7 on-duty apprehensions and a large amount of crack cocaine and heroin being confiscated, combined with his passion, endless dedication and expert knowledge make him an invaluable asset to the overall success of K-9 teams in Vermont. His deployment in 2011 with K-9 King Otto, where they helped apprehend an armed fugitive that had just been involved in a shooting at a local Inn, helped win the apprehension of the year award and exemplified Sgt. Prouty’s control in extremely dangerous and high risk incidents. Inducted VT Police K-9 Hall of Fame (2014).

Andrew “Andy” Holbrook (non handler category)
For most of Andy’s 25 year tenure at the academy he has been assigned to the Vermont Police K-9 Program. He has been under the direction of all three Head K-9 Trainers, past and present. Andy has performed a myriad of tasks for the K-9 program including maintaining the K-9 house and vehicles and assisting K-9 teams during training scenarios. Andy completes every task given with persistence and without complaint despite daily personal challenges. Andy has met most of the hundreds of police K-9 teams that have been a part of the program since its inception in 1979 and his commitment to the Vermont Police K-9 Program is second to none.
Inducted VT Police K-9 Hall of Fame (2009).

Sgt. Todd Protzman and K-9 Max – VSP (1999-2007).
Outstanding police K-9 team known for high risk involvements. Tracked attempted murderer in 2000. K-9 Max air scented about 100 feet from the suspect, allowing Protzman and his backup officer to take cover. The suspect committed suicide 2 hours later. SAR 11 hour find of 3 lost canoeists with hypothermia in 2001 in extremely difficult terrain. In 2001 K-9 Max had a building search find of 2 burglary suspects hiding in a ceiling and in 2005 located a fugitive from Florida in a basement. In 2002 K-9 Max and another K-9 team tracked bank robbers and Max located the bank bag, ski masks and the dye-stained money. In 2007 K-9 Max tracked 2 burglars for 1.5 miles through difficult, mountainous terrain and found evidence solving a rash of burglaries. VT Police K-9 Apprehension of the Year (2007). Inducted VT Police K-9 Hall of Fame (2008).

Chief Rick Cloud and K-9 Tazz, Chester PD (1998-2006)
VT Police K-9 Tracking Team of the Year (2001). K-9 Tazz known as “go to” tracking dog during his career. 4 Lifesaving tracks including a 4 year old found hanging on a ledge, an Alzheimer’s patient and a subject who had fallen through ice and was found on shore nearby with hypothermia. K-9 Tazz tracked a suicidal subject with a gun at Mad River Glenn Ski Area. The subject threatened officers on 3 separate occasions, but was deterred by K-9 Tazz and eventually relinquished the gun. K-9 Tazz assisted in the apprehension of a suicidal and threatening subject with a razor blade who put down the weapon when confronted by Tazz. Numerous tracking finds including 3 escapees from Windsor Prison.
Inducted K-9 Hall of Fame (2008).

Retired Sgt. Fred Busch – VSP (1973-1997)
Sgt. Busch is considered the founder of the Vermont Police K-9 Program. He set the foundation for the program when he took his K-9 Lancer to Connecticut to certify him in this state in 1973 since Vermont, at the time, did not have a police K-9 program. Sgt. Busch worked Lancer in the late 1970s becoming the first VT police K-9 head trainer in 1979. In this first patrol class he certified his second dog, Saber, this time in Vermont, under his own direction. Sgt. Busch remained in this position until 1997 and still has an influence on the program today due to his legendary teachings. Sgt. Busch is credited with certifying nearly 100 police K-9 teams. Inducted VT Police K-9 Hall of Fame (2008).

Sgt. Russell Robinson and K-9 Major – VSP (1987-1997)
On August 20, 1997, K-9 Major saved numerous law enforcement lives when he air scented Carl Drega, who had just murdered 4 people in New Hampshire including two NH State Troopers. The tactical team that K-9 Major was leading, walking down a remote location in Vermont, was about to walk into an ambush that Drega had set up. In a shootout at this location, several officers were wounded and Drega was killed. Received Lifesaving Awards, Combat Cross, K-9 of the Year Award, Citizen of the Year Award, State of New Hampshire Meritorious Award, and U.S. Department of Justice Award. Inducted VT Police K-9 Hall of Fame (2008).

Sgt. Gary Genova – VSP
In 1988, Sgt. Genova was assigned to the VT Police K-9 Unit, became an Assistant K-9 Instructor in 1992 and head K-9 Trainer in 1996. Sgt. Genova is credited with training and certifying over 100 Police K-9 teams throughout VT and New England during his 16 years of dedicated service to the program. Known as an innovative trainer, Sgt. Genova is credited with advancing the program in Patrol Tactics and SAR. Sgt. Genova is a co-founder of the VT Police K-9 Association and has handled two K-9 partners: K-9 Buck, a German Shepherd, certified in Patrol and Narcotics Detection and K-9 Corey, a Labrador Retriever, certified in Explosives Detection.Inducted VT Police K-9 Hall of Fame (2008).

Retired Sgt. Linda Jones Elrick – Rutland City PD
Sgt. Elrick has dedicated over 27 years to the VT Police K-9 Program, starting with her graduation from the Fifth Basic Patrol Dog School with K-9 Christopher in 1981. In 1984, Sgt. Elrick and K-9 Christopher graduated from the First Basic Narcotics Detection Dog School. She has been a member of the Vermont Criminal Justice Training Council’s K-9 Committee since April 1985 and continues her work on the committee today as the most senior member. Sgt. Elrick’s historical knowledge and tireless dedication is a testament to her passion for the VT Police K-9 Program. Inducted VT Police K-9 Hall of Fame (2008),

Retired Col. Tom Powlovich and K-9 Cheyenne- VSP (1980-1986)
On August 12, 1983, Powlovich and Cheyenne were dispatched to Vergennes to assist on a report of an armed suspect who had fired shots and was now on foot traveling towards the school. Officers located the suspect who was still armed. The suspect pulled a handgun from his pants and ran when confronted. Powlovich sent Cheyenne after the suspect. the suspect, who had taken a position around a trailer, was distracted by charging Cheyenne and took aim and shot him. The suspect then fired on Powlovich and a Vergennes officer. They returned fire and fatally shot the suspect. Powlovich said the actions of Cheyenne saved his life and potentially the lives of two other officers. Cheyenne was shot in the shoulder, later recovered and worked three more years as a police K-9. Vermont State Police Combat Cross (1983). Inducted VT Police K-9 Hall of Fame (2008).